Osteoporosis is a condition affecting the strength of your bones (called bone density). In osteoporosis, bones lose strength and become more fragile. Your bones are made up of minerals, such as calcium. When bones lose these minerals, they become thinner and less dense. Osteoporotic bones break or crack more easily than normal bones. There are normally no signs or symptoms of osteoporosis until a bone breaks. Any bone can be affected but the most common breaks are found in the hip, spine, wrist, ribs and pelvis.

Osteoporosis is typically treated with medications that stimulate bone growth. While the medications are effective, they can cause side effects of nausea, abdominal pain, swallowing difficulties, and an increased risk of ulcers. 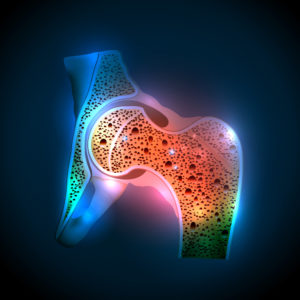 Can Medical Cannabis help my osteoporosis?

Cannabis has a long history of human use. Most ancient cultures didn’t grow the plant to get high, but as herbal medicine, likely starting in Asia around 500 BC. The history of cannabis cultivation in America dates back to the early colonists, who grew hemp for textiles and rope. Misuse in the 20th century led to the prohibition of cannabis globally although its legal status is changing in many countries.

There are over 80 compounds known as ‘cannabinoids’ that can be extracted from the cannabis plant (Cannabis sativa).  Studies have shown that cannabinoids and the endocannabinoid system play an important role in the regulation of bone metabolism (1-3). Bone metabolism is a lifelong process where mature bone tissue is removed and new bone tissue is formed.  The endocannabinoid system (ECS) refers to a collection of cell receptors and corresponding molecules – a bit like a key and a lock. Each time the ‘key’ fits the ‘lock’, a chemical message is passed giving the cell, specific instructions. There are two main receptors that make up the ECS called Cannabinoid Receptor 1 (CB1)  and Cannabinoid Receptor 2 (CB2). The keys for these receptors are called endocannabinoids. The receptors, CB1 and CB2 are found throughout your body and are involved in bodily functions such as pain, mood, immune function and sleep.

Scientists are using this information regarding the interaction of the endocannabinoid system in our bodies and cannabinoids derived from the cannabis plant to research therapeutic methods for treating osteoporosis.

The use of medical cannabis is now legal in Australia and in over half of the US states.  This helps tremendously with future research as more researchers can access the cannabis plants and its active ingredients to find out more about how it works.

The use of medicinal cannabis in Australia is only for individuals with painful and chronic (long term) conditions and there is currently no specific medical cannabis treatments for osteoporosis.

It should be noted that strict rules and regulations surrounding the use of medicinal cannabis remain in place, meaning not just anyone can access it.

Article republished with the consent of Cannabis Access Clinics